Fountain of the Arts

Come see our Homeschool Production of "Frank's Monster"! We're back on stage after almost 2 years and we are so excited!! Come support live arts! 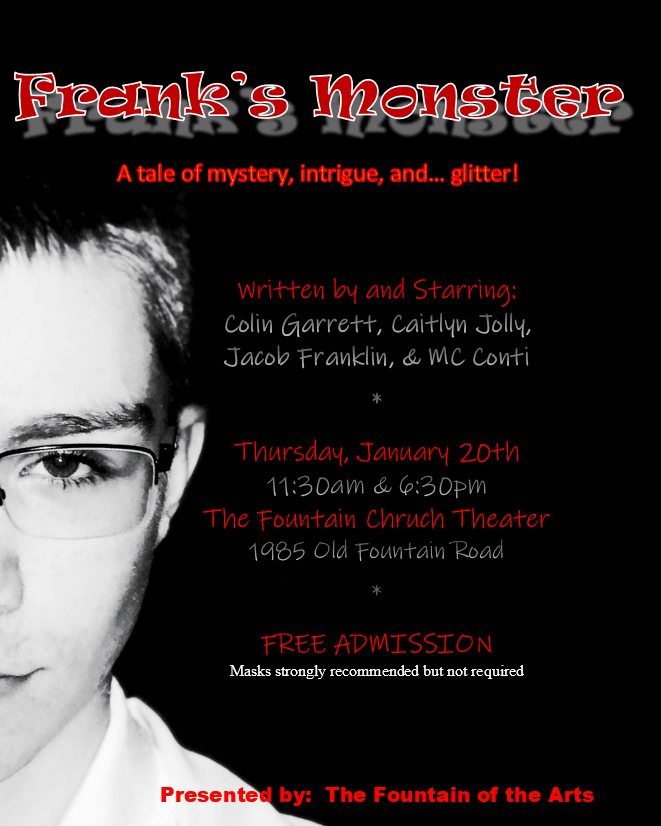 In this class, we will introduce (or review) the basics of theatre such as stage direction, vocalization, character work, basic movement, and performance. We will do all of this with the use of group games, memorized scene work, monologues, improvisation, imagination, and PERFORMANCE!

Our teacher MC is a big believer in learning by doing, so we are always working towards a performance of some kind. In addition to studying acting concepts, this class will also explore theatre out in the real world. We will explore the audition process and help the students build a suitable audition portfolio using my experience both as a director and as an actor who auditions regularly. We will hold a mock audition so the students will know what to expect when they are out in the real world of theatre.

﻿We will also talk about concepts such as working with scene partners, forming character types, working with directors, professional theatre etiquette, and learning to read an audience. Mary Carolyn “MC” Conti graduated from Northside School of Performing Arts in Atlanta and went on to receive her BA in Theatre Arts from Fordham University in New York City. She worked in numerous Broadway and off-Broadway houses during her time in New York and had the amazing opportunity to study under Tony Award-Winning Director Michael Mayer. Before having kids, she worked all over the Atlanta theatre scene and received 2 MAT Nominations for Best Director of a Musical. Once her 3 children showed up, her attention turned towards children’s theater and there she discovered a love of passing theatre on to the next generation. When not directing or teaching, she can be found ON the stage. Some of her favorite roles include Mary Poppins in “Mary Poppins”, Belle in “Beauty and the Beast”, Annie Oakley in “Annie Get Your Gun”, Alice in “You Can’t Take it With You, and Lucy in “You’re a Good Man, Charlie Brown”.

Sunday Worship Service at 11am